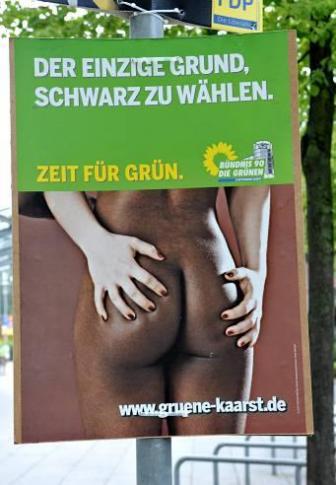 The Gospel According To Chester

“Where the White Women At?”

Just about the only black ass you’ll ever see in Kaarst, NRW showed up on a political ad for the Green Party. And of course it had a white woman’s hands all over it. As reported in Der Spiegel, the decision to post this ad was by the local party organization and not the state one, which means someone there definitely likes brothas. The ad has since been taken down among the obvious denunciations of sexism and racism, with the left screaming “How dare the Green Party exploit that white woman in that way?” and “How dare they promote black men over white men?”
Seriously though, for myself I’m more captured by the slogan “The only reason to choose black.” As a man I could say thanks for the nod, but as one of color it is a little insulting. Of course if it were a black women instead, as I’ve seen it erroneously reported elsewhere (can’t you see the nail polish?), it would be much more egregious, as women of color have had to endure much sexual oppression in majority-white societies.
Nevermind that the GP from this area would stoop to this level to gain votes. I’m from a part of the US where you definitely know who your friends aren’t. So liberal and conservative are just labels to me, and everyone’s liberal, until their son comes home with a man and their daughter comes home with a black man.
So what’s the problem? Well I’d like to think that there’s more to me than my afro, obvious sexual prowess, and the possibility to give women caramel-colored babies, which is what the ad evoked. I’m not a sperm donor and biracial children are not fashion accessories who’s body parts you can show off at Yaam to the other German moms. We’re people. Now others have told me it’s just stupid superficiality same as what artists and musicians may go through. Yeah but art and music is what you do. Being of color is what I am.