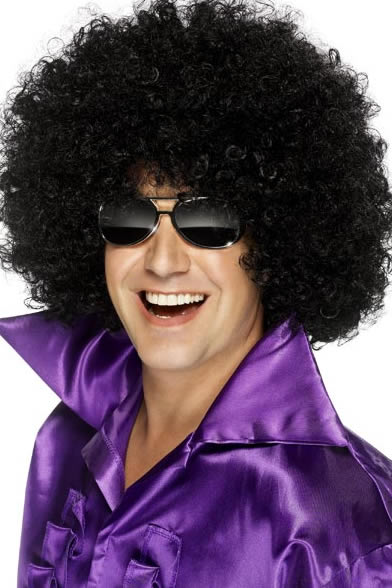 “Everybody wants to be black on a saturday night…but not on tuesday!!”

After six years of living in Berlin, I thought maybe it was time I check out the Christopher Street Day Parade. I went pretty late and I think maybe I missed most of the assless pants and latex. Apart from the music trucks which were filled to the brim with overt gayness and hyper-sexuality, I didn’t notice much of the same out in the crowd of bystanders, except for one chick carrying a sign advocating group sex. Her group was pretty small though.
One thing I did notice a lot of were afros. Relax people, they weren’t real afros on real black people. The neighborhood hasn’t gone anywhere yet. There were blacks there of course, but none of the five I saw had them except one dude whose afro was as fake as the rest of them. So here I am with my real afro surrounded by fake afros on white people and wondering wtf, as in why the ‘fro, and why at a gay pride parade? Why weren’t they selling fake mustaches or fake Birkenstocks? What is it about an afro that makes non people of color want to wear it outside ’70s parties? Almost every festival, concert, party, stag doo, hen night, baptism, and bar mitzvah is gonna have someone wearing a fake afro. Then if they aren’t wearing a fake one, they want to touch a real one.
As with the other stereotypes associated with black men, I’m of two minds about this. Sure you can feel like a celebrity when people stare and smile at you on the street, want to touch your hair and even take a picture with you. Hey, I’m big in Macedonia. Then I’m reminded by my white friends who have traveled to Africa and places like Jamaica of how they received the same kind of attention over their skin color and blond hair. It could be worse, right? Any publicity is good publicity and a rub of the head beats a punch in the face. I wonder though, if they sell blond wigs at festivals and parties in Kingston.
Actually, how many people of color go further and dye their hair blond or even bleach their skin so that it’s lighter? You see, fake afros are strictly for play. I don’t see people wearing them to work, in the shower, or in bed. The emulation we people of color get is on a superficial basis. However, when other people of color emulate white Europeans and their kids over in America, it’s much deeper and goes to rather skewed views of beauty and status. I noticed this when I was in India and my white friends were harassed the most by street people because they were perceived to be wealthy. In some places whiteness is even considered a sign of good fortune and people will touch a white person hoping some of it will rub off. The lighter in skin color you are, the more elevated you are and sometimes this also includes people of color. It’s not a party issue,it’s a self-esteem issue.
Many times I’ve heard, “I wish I had hair like yours.” Well then, I say go for it! We can change a persons sex but we can’t give people real afros? Go even further and make yourself black. This has been done before. So then you can take it all, the low life expectancy, institutional racism, and the unholy attraction of mosquitoes. Funny how bloodsuckers just love dark colors. Seriously, being a person of color is a 24/7 thing. So you gotta take the bad with the many good things. It’s not something you can take off when the party’s over or lose in the taxi on the way home. So no more part-timers allowed, and no more free hair touching. That’s the gospel according to Chester.