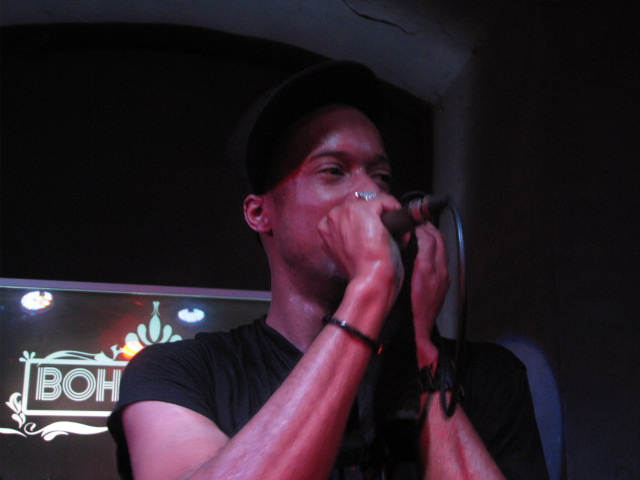 You have to respect a performer who brings his own washcloth as if sweat would come too quick to reach the stage-supplied towel. Black Milk came to Berlin with no intentions of holding back. His band preceded him: a DJ who did a small set, a keyboard player that sings as well, a bass player that mean mugged me and drum player that looks like he was born with a set of sticks in his hands. So far so good but how will this fit together.

On Friday night, I was in no mood to be generous. I came too early as usual and sat in the corner of the dance floor reading while the pre-show DJ played grandma bedroom funk and the bouncer threw out a drunk girl in a slinky dress that kept hopping on stage and doing an imitation of Amy Whinehouse’s last performance. By the time the band hit the stage, I’d been invited to some strange twilight zone break dancing contest and narced out three smokers who all looked like they have figured me out and were plotting to take me down. When the band finally hit the stage I was front and center and watching my back hoping it was all worth it.

The DJ started off with a 5 min set of stuff I never heard of but would love to hear again. Black Milk took the stage armed with a washcloth and after a couple of verses it became clear that it would be worth it. Black Milk does not stutter and his lyrics are tight but the music took me places that the subject matter did not. I felt like he help back some ideas that may have compromised his street cred because his intelligence comes through even in a brag rap and leaves you wanting more nuance. Regardless, he can turn a grocery list into a sick flow and makes his talent indisputable by hooking a crowd and refusing to let them go.

It is appropriate that Black Milk is from Detroit. Detroit has just been gutted by budget cuts and much of it lies in ruins to America’s former greatness. Detroit, like Black Milk has become a symbol of beauty forgotten – both are undervalued. Black Milk has a musicians ear and a poets pen but somehow comes together in a rappers package that people don’t know what to do with anymore. As long as he keeps bringing it I will continue to be at show as my grouchy, reluctant self knowing that I will not regret a thing when the music plays.