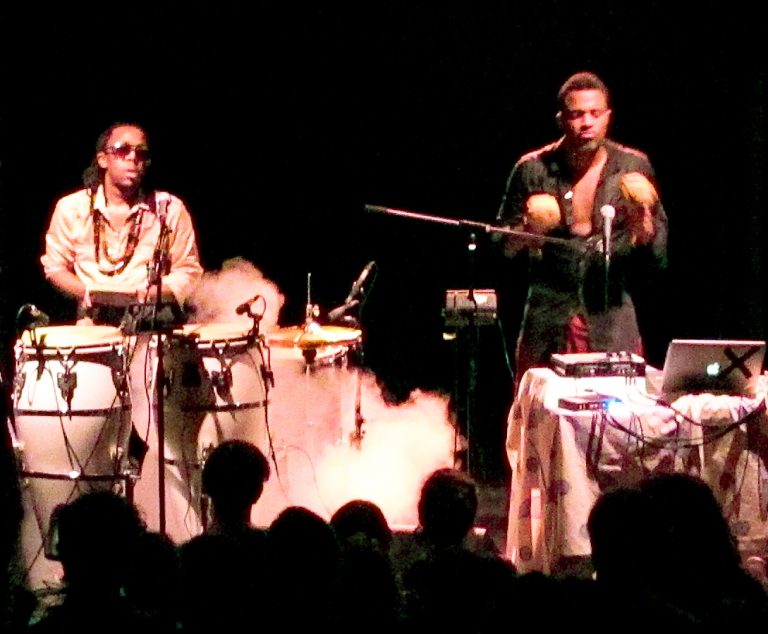 From the days of the Digable Planets in the 90s untill now,’Butterfly’, now known as MC Palaceer Lazaro is still doing his funky hiphop thing.

I went to check out his latest project, ‘Shabazz Palaces’ last Friday night after the recent release of their first full length album entitled ‘Black Up’ on the well known Seattle based Sub Pop Recordings.

The venue was Festsaal Kreuzberg near Kottbusser Tor station in Berlin, an excellent place for live performances.

Upon entering,  the tone for the night was set as warm red lighting and smoke, laced with the energetic sounds of Londoner Infinite Livez greeted us. We had a good view from the balcony when Shabazz Palaces started.

The crowd was as great as Berlin crowds can be, cheering madly and showing their support for Shabazz’s use of samples and voice effects.

Veering away from what is considered ‘the norm’ in hiphop, towards a more synthesized, psychedelic experience is what gives them their distinctive edge.

The show was very interactive, their lively movements and vibrant use of percussive instruments kept the crowd locked. Coming from Africa, I instantly recognized the distinctive African influence in their music and the all too familiar dance moves that I have grown to love and know so well. It came as no surprise when I found out that the other half of the group, Tendai Maraire is a percussionist originally from Zimbabwe.

Having listened to Shabazz’s new album, I was even more impressed by their live performance and their energetic stage presence. I have seen many hiphop acts on stage before and have often been disappointed, but Shabazz Palaces knows how to keep a crowd entertained. They´re original, spontaneous and their improvisation and unpredictability left many, myself included, mesmerized.