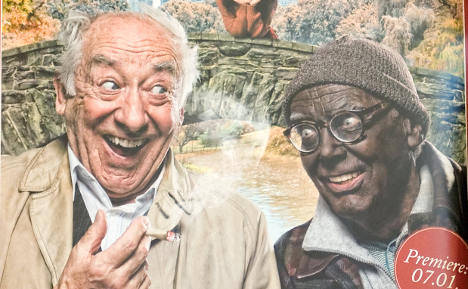 Europeans are not above the stain of racism. We always knew that but recently there have been instances where they wore their racism with belligerent pride and called it tradition.

The first “tradition” comes from The Netherlands and centers around Christmas when all the little boys and girls snuggle in their beds at night in anticipation of Santa Claus and his slave helper, Zwarte Piet or as we call him Black Pete.  The history around Black Pete is a slippery chameleon that tries to avoid the justified charges of blatant racism. Black Pete is now the Santa’s right-hand Negro whose side job is to punish misbehaving kids because black people are scary.

Black girl gone breaks it down in her blog.

“What I find most revealing is that people simply do not know the troubling history of Zwarte Piet.  Attributing the tradition to something that happened hundreds of years ago, entirely separate from the practices of blackface and minstrelsy that rose to popularity in other parts of the world in the nineteenth century, the practice of painting one’s face black and playing the role of a servant is seen in the Netherlands as a harmless coincidence of similarity to those racist traditions, at best.”

Dutch racism always troubles me more than it should.  Perhaps because I am a product of it.  I bear a Dutch last name and was born in Guyana, next door to Suriname, a former Dutch colony.  It is safe to say that at one point some Dutchman named VanDeCruze owned my people.  Researching my genealogy has been an exercise in futility because the Dutch were some of the most brutal slave traders and owners.  The Guyana’s (French, British & Dutch) were massive trading bazaars on the northern east cost of South America.  Yet the Dutch seem oblivious to the suffering that their prosperity was built on.

An attitude of blamelessness when racism is brought up is prevalent throughout Europe.  In Germany, the subject of race is simultaneously taboo and ever-present.  Generally there is no ongoing discussion until something explosive and racist happens such as the serial killing spree of Neo-Nazis, or a German big-wig writing a book explaining Muslim inferiority , or a comedian wearing blackface to mimic Obama, and most recently, a German actor hitting the stage in blackface.

“A popular Berlin theatre troupe has denied accusations that its adaptation of a Tony Award-winning play featuring a white man in blackface is racist, saying it’s “tradition” for whites to play blacks in German theatre… Thomas Schendel, the director of “I’m Not Rappaport” told The Local. “When we couldn’t find an elderly black actor who fit the role and could speak with a perfect German accent, we opted for blackface make-up.”

Ahhh – the perfect German accent.  Now that race is too obvious of a divider, the new demarcation is language.  Needless to say there are numerous Afro-German actors with flawless German accents but I’m actually happy that they are not working for Thomas Schendal – he is a racist jerk.

Racism is everywhere. When I went to Spain, drunken Germans were yelling their racist affections to me almost everywhere I went.  It was like paradise lost.  So while the even-headed, pseudo-intellectual racist may be annoying, the drunken one is more immediately dangerous… even if you work for the US Embassy.

A black member of the US Embassy staff was assaulted because of his race in September of last year. It was commendable that Phillip Murphy, the US Ambassador used his position and white privelege to call-out and condem the attack.  He wrote an open letter that urges Germany to  not  “look the other way and hope that somehow magically bigotry and racism will disappear. We have to speak out and we have to take action,” the ambassador wrote.

But looking the other way is easier.  Most whites don’t know how to confront racism and they are not invested in learning.  The risk of questioning tradition is just too high.