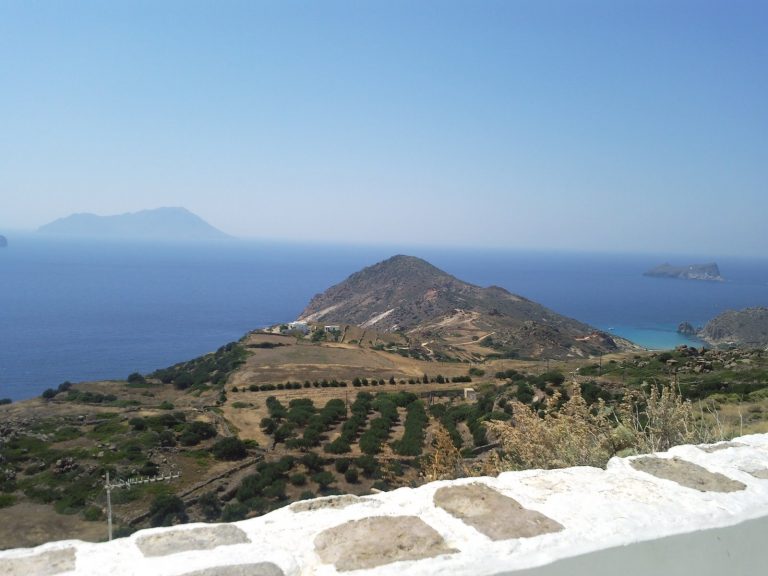 It takes me too long to process a moment and maybe it is because I am too busy being in it, but most likely it is because I don’t understand the context of my experience until I step away.  I have to forget a little bit in order to really remember.  I am remembering Greece.

My girlfriend since college and I planned a trip.  I would leave my two kids and she her three and we would meet in Athens then sail to some undiscovered island.  She had a Greek friend and knew the perfect island.  We needed sun. I live in Berlin and she lives in Montreal.  In the last few years we taught ourselves German and French and made lives for our families in foreign lands.  Yet more than anything, we both missed the sun.

Greece is paradise.  The earth there is designed to give its inhabitants everything they need to survive.  The paradox of the modern economics is that the countries that are rich in resources are almost always the poorest countries.  I know that this is not accidental. As natural resources become scarcer, it is essential that resource rich countries are indebted so that they are forced by hook or by crook to honor debts that they can’t remember incurring. 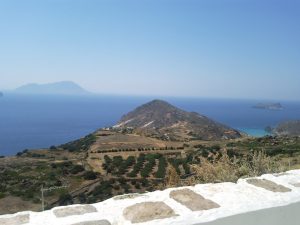 My girlfriend was supposed to meet me at the airport but she wouldn’t.  She was sick and delayed her arrival by one day.  I would have to be on my own in Athens while I waited of her.  I took a bus to the center of Athens, walked through the protests and police into a side street in search of a hotel.  I knew I would not have to pay the sticker price.. I was told that every price here was a suggestion and I could get what I wanted for whatever I was willing to pay if I haggled.  I walked into a cozy bed and breakfast and asked how much a room would be.  The man behind the counter assessed me and said 60 euros confidently.  I gave him a stare and turned to walk away.  “Wait!” he yelled.  “How much do you want to pay?”

The night was hot and musky so I left my things in my room and went out to explore.  I tried to avoid the noisey square but the side streets were dodgy and I did not want to go to bed. The square was like another city. Someone was performing music in the center to a large crowd.  Stations for art, books, internet access and cooking were set up.  There were mini-performances throughout the square and I sat down to Blues – a man playing some of the best Blues guitar I’d ever heard.  He was almost too good.

When he was done he began talking to me.  Introductions were made.  He was a Greek, a student and had never left Greece.  His eyes lit up when I told him I had lived in North Carolina.  “Have you been to Mississippi?  Louisiana?”  he asked eagerly.  I told him about my travels there and asked why he did not go there himself.  “I would love to but I am a protestor and I have a record.  They would not give me a visa.  I tried.”

Then someone came around to ask me if I was hungry.   They would be serving food soon.  Was I thirsty?  Did I need a smoke?  I could have easily stayed there all night.  I felt safe.  I felt taken care of.  The police kept their distance and loosely patrolled the perimeter.  A protester was sweeping the ground of cigarette butts. There was a tent I could sleep if I was tired.  No one asked me how much I wanted to pay. 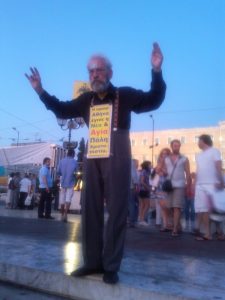 Hospitality was embedded into the protests and it was a necessity.  The people who took up residence every day in the tents were often obvious outsiders.  Homeless, who were used to living outdoors and could offer their expertise.  Young people that had the bravery and stamina to rough it.  A vulnerable bunch.  Those in the movement with children, disabilities, jobs and other responsibilities could visit but not stay.  The absence of allies was dangerous. The police were always looking for an opportunity to violently clear the square without hurting anyone “important.”

I kept my picture-taking to a minimum.  Sometimes I would raise my camera and people in the crowd would hide their faces. Resistance is often shut down through coercion and people have lost their jobs because they protested and were found out.

I was in a crowd of onlookers when I started a conversation with Demitre.  He was a doctor, firmly middle class and he believed in the cause.  “Everyone does.” he said.  “How can you not?” He laid the issues out for me in detail:  the corruption of the government,  the neo-imperialism of the EU, the unique challenges of Greece, youth that had little to hope for after education. Then the conversation turned to philosophy and the German canon. He started quoting Kant.

There is a sentiment that the EU is a scheme by the richer European countries (particularly Germany) to colonize the poorer ones. Demitre spoke German and told me proudly about the time he studied there. He wanted to speak German with me but I felt ambivalent.  Everywhere I go in Europe, German is seen as a mark of success – something that is only spoken by the truly intelligent. At times, I prefer to stay silent.

I ended up in a circle of supporters clinging to my anonymity. I appreciated being just another body letting myself get lost in animated Greek conversations that I did not understand.  I stared at Greek letters that reminded me of math and fraternities. I tried to decipher the performance pieces and art installations that abounded. I soldiered through the second hand smoke on an uncomfortable wooden bench and drank water that someone gave me. The night was clear.  The air was warm.  The people were poor.

When my eyelids got heavy I went back to my nearly-free room to sleep.  In the morning I ate breakfast at the hotel.  It was included in the price. Then I was off to meet my friend at the airport, take the ferry to a corner of Greece without protests nor police.  Where old fishermen with pipes winked at us.

In all that beauty, I forgot my night alone in Athens.

Athens is burning now.  After the politicians decided to save themselves instead if saving their people. Greece does not need austerity measure, they need integrity measures.

I remember when I took my first road trip across Europe in 2007.  I was in awe at the Spanish/French border.  The border-check booths are still there un-manned and abandoned.  They look like artifacts from another time.  The idea of no borders is appealing.  Freedom of movement is a basic human right but the freedom of movement is illusory.  A Greek can come to Germany but before they make money, they must learn German (2 years) then they have to get their degrees accredited in Germany or get German degrees.  Then they have to find a job in a xenophobic climate and they have to support themselves somehow while they do all of this.  It is a simpler and sunnier proposition to just stay in Greece.

I am no economic expert so I don’t know where the all of the money that Greece owes went.  The problem is that the Greeks don’t know either and they are certain they are being asked to pay for an imaginary debt that was inflated by their government.

I live in Germany and most of the food I eat and the clothes I wear come from poor EU countries like Greece. Germany produces mostly luxury goods and since we live in a world that values what we want above what we need, Germany wins. Someone has haggled Greece away from the Greeks.  The Greek politicians may have already forgotten the value of what they have lost but the people of Greece have seized this moment and are burning it into our memories.