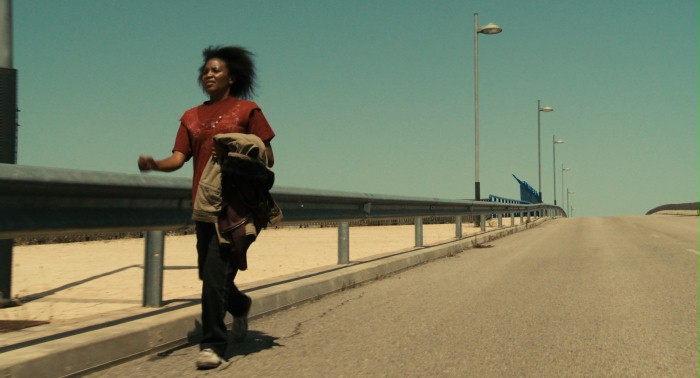 Tony Gatlif’s film starts off with an undocumented African immigrant named Betty who washes up on a beach in Greece seeking a better life. The beach is littered with the shoes of other people like her, and these are just one of the symbols that the director uses in a film that feels like an art/film school project more than a serious piece. I went into this movie thinking it would be about the plight of one immigrant against the backdrop of the beginnings of the Occupy Movement, which actually started with the Spanish Indignado Protests in Madrid. There is that, and witnessing the trials of the young Betty as she travels across Europe gives the film a grittiness and reality. However, the surrealistic artsy parts interspersed throughout the movie work in some ways but distracts from the movie in others. For instance, Gatlif’s use of shoes to represent undocumented persons works for me. We see their faces and often only their names are given which clearly shows that these people can even come from developed countries like Germany. Movement is conveyed through fruit rolling down the street, flowing water and quickly passing clouds. However devices that didn’t work for me were things like the rolling soda can. Ok so she’s supposed to be like the soda can that gets used and tossed away, that rolls down the street until it’s stopped by something. Alright I get it. There’s a fox in the hen house scene which really is too much. 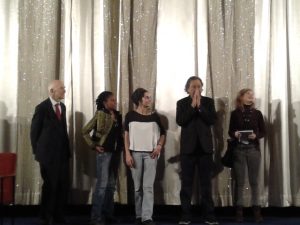 Despite these distractions, I felt myself still interested in Betty’s situation, perhaps because I could relate to her. I too was once a person of color stuck in a foreign place with no passport, money or a place to stay and in constant fear of the police, ironically in sunny Espagna. When I actually did get frisked and questioned by police, my American driver’s license was my saving grace. The scenes with the actual protests, with young people in full force fighting for their rights were very stirring. If only more care was given to tie Betty’s plight with that of the movement. As it is, the movie seems to be trying to tell two different stories, and Betty is merely a way for us to see a revolution unfolding. She encounters different people but no relationship is established with them. She takes part in the protests but you wonder if she knows what’s happening or if those protesters whom she meets know what her situation is. There are several lines from Stéphane Hessel’s essay Be Outraged in the film. Among them is: “Look around at the treatment of illegal immigrants”. Good for the audience, but perhaps the people in the movie could take notice as well. 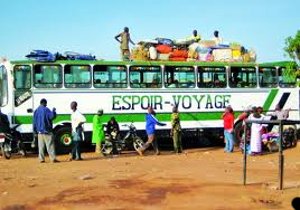 Another film that deals with the subject of immigrants from a more personal and too seldom seen perspective is Michel Zongo’s Espoir Voyage. Zongo travels from his native Burkina Faso into neighboring Côte d’Ivoire where his brother Joanny went to work on the coffee plantations 18 years before and then died some time later. A film that shows the migration of Africans within Africa was new territory for the director as well as myself not only because of its subject matter but more importantly because it’s a purely African story. There are no European characters to dominate the story or guide the audience through the trials of these workers. It’s just simply one man with a camera taking us aboard a rickety, bus full of people that’s traveling on an uncomfortable and sometimes perilous journey to the border. Once in Côte d’Ivoire, through his lens we come into contact with lively characters who colorfully tell the stories of the slave-like conditions coffee and cocoa bean farmers have to work under. We can see the tired worn faces of mothers who’ve had loved ones go to these plantations only to never be heard from again. 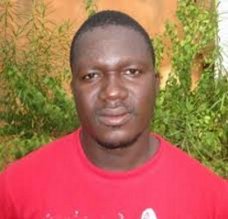 Despite this, Côte d’Ivoire is seen as the promised land for these migrants, with its rich coffee, cocoa, and rubber resources. Zongo avoids showing any of the political turmoil of the time (it was filmed in 2011 during the second civil war) and focuses on the story of his brother and the Burkinese community there that came to make money for a short amount of time but found a different reality. There are many differences between this story and Indignados, but one thread that ran through both was the concept of never forgetting your roots. This was Betty’s mother’s advice to her, and this is said throughout Espoir Voyage. There is also the lost feeling that one gets in a strange land, and the drive to succeed and not return as a failure, even when one has reached a dead end. The movie ends on a touching note when Michel finds his brother’s old boss and workmate, and finally the answers he was searching for. In retrospect, I enjoyed this movie. Unlike other documentaries that feature talking heads who color your perception with history and politics, Zongo’s camera merely shows the people and lets them tell the story, leaving viewers to think for themselves. Its mystery is engrossing with a tone that’s upbeat at times and somber in others but never too sad. One would think it wasn’t answers the director was searching for but for his brother Joanny himself. He as I weren’t disappointed.