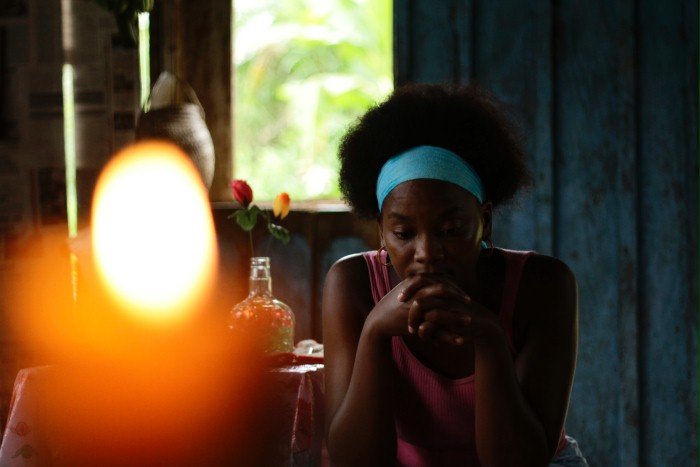 I totally understand why the director of Chocó, Jhonny Hendrix Hinestroza, cried while introducing the movie’s premiere at the Berlinale.  He spoke about the fact that this was the first time that a story about Afro-Columbians would be told on film.  It was a monumental moment because although there are more blacks in South America than North America, they are absent in media representations. Part of the reason I was relentlessly teased as a child was because my black American school mates did not believe I was from South America because I was black.

Chocó began with the beauty of rural Colombia, the singing of an Afro-Columbian spiritual gathering, and a sunset.  The pseudo-documentary style leaves you unprepared for the violent bits that follow.  The first time we meet the georgeous protagenist, Chocó, she is being raped by her husband, a drunk abusive musician who gambles.  He has only one sober scene, one in which his face is not shown.  Otherwise he has two adjectives and one tragic certainty.  He is the cause of everything and the center of nothing. Chocó is holding it down for her two kids.  She nurses memories of her new unbruised love with her husband and hopes of building a better life for her children who are already scarred from the abusive household.  She is the mule of the movie that rebels the way mules do – with blind determination. 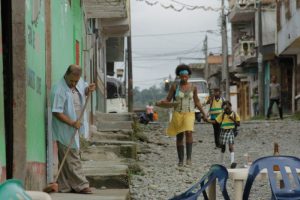 Between the heartbreak, there is a lush glimpse of paradise lost.  The filmmaker made it clear that he wanted to paint a portrait that mirrored reality.  Listen to the podcast below for a more in-depth explanation. He grew up on the roads in the film and wrote what he saw.  But I left with an ache in the pit of my stomach about this movie because I knew I could not shake it.  It exhausted me.  I want to forget parts of it.  I know that this story happens but the fact that stories of black trauma are so often the only representations of blackness I see on film. In particular, I have never seen a dark-skinned black woman on screen as a main character that was not being abused in some way. In the podcast, you will hear me ask the director if he was afraid of reinforcing stereotypes with this movie.  He is an Afro-Columbian and I don’t think that was his intention.

The acting was superb. I believed every minute, every scene.  The children were perfectly casted and many scenes were a mixture of documentary and and staged scenes.  One can’t determine who is acting and who is not.  This allows the climax to have a powerful and lasting impact. Yet little is revealed about the inner-workings of its main characters leaving the audience to endure brutal events that have little emotional context.

Although this movie is powerful and technically well made and superbly acted, I was not clear about what I could walk away from it with.  I don’t think it is film’s job to give me a feel-good message or to always paint pretty pictures of people of color.  Yet the rarity of representative images coupled with the pathology of the images of black folks in media creates a context that requires more from filmmakers that just a good story.  The myth of black pathology is always a good story but it is over-told.