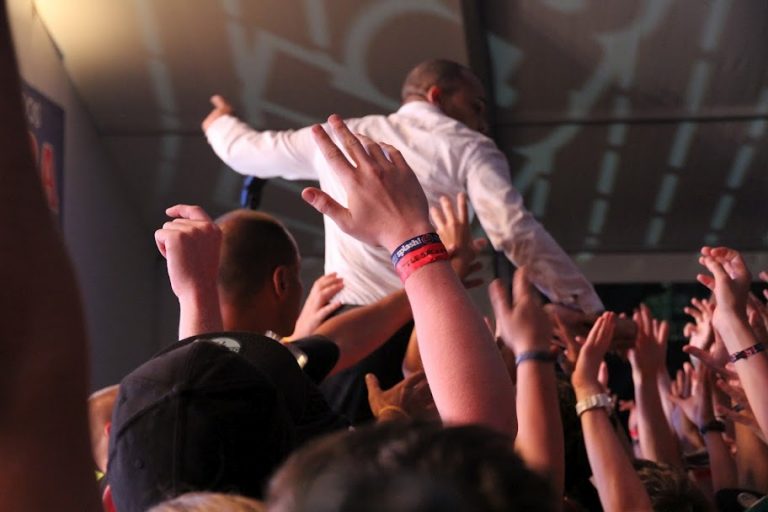 It’s been a while since I’ve been in the dancehall so I forgot the amount of energy required to be fully present at a solid sound system show.  Major Lazer is as solid as a sound system gets and in true form, they were prepared to impress at the Splash Festival. They came out dramatically, clad in blacks suits and ties to indicate that they meant business.  Photos below.

Then we saw the dancers, who contrasted the men by wearing jean shorts and plain white t-shirts. Apparently these dancers have boundless energy and spent the entire set doing high energy movements that would wear an experienced aerobics instructor out.   Check out the video below.  This was just the beginning.

Major Lazer is notorious for making infectious music that stays true to dancehall.  They use guest vocalists so the sound never gets tired but it stays consistant. After 20 minutes the entire crowd was a mass of sweat and smiles. So much so that when the MC commanded the audience to take off their shirt and wave them around their head, all shirts came off.

The audience was treated as though they were part of the performace and the performance was more like a party.  There was no central performer, just a hype man and a DJ.  The two ML dancers improvised for most of the set.  The dancehall queen of Germany, Pinky, made a guest appearance . The crowd was surfed.  Mosh-pits cropped up.  The MC got in a big ball and walked all over the audience.  The audience was regularly doused with bright lights, confetti and water.

After about an hour of this I was spent.  I just wanted a shower and a dark room.  It became clear that it may not work for me to listen to dancehall music in a place too crowded to dance.  But I left the set satisfied.  Major Lazer makes hits.  Their concert hits hard.

Major Lazer will be in Berlin on September 7 at the Berlin Music Festival.