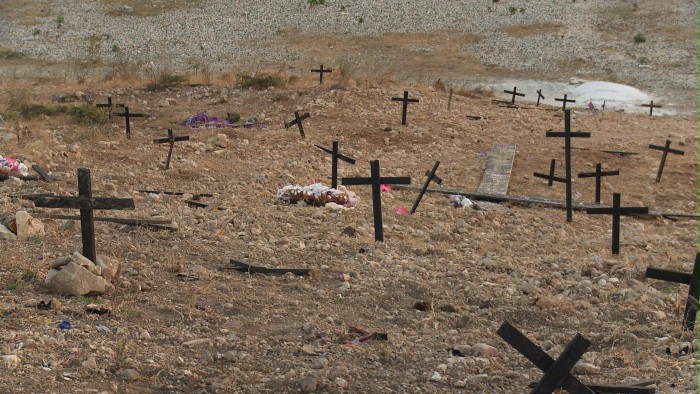 One only has to tally up all of the “buy this t-shirt/pair of kicks/hamburger and we’ll donate a fiver to the cause” campaigns after the 2010 earthquake in Haiti to know that many businesses used the opportunity to make money off this tragedy by exploiting Westerners’ desire to help. What you may not have known is that too many NGOs and charities work on much the same principle.

FATAL ASSISTANCE (Assistance Mortelle) is Haitian-born director Raoul Peck’s attempt to set the record straight.  The feature documentary rebukes the naive assumption that relief efforts are purely altruistic, and shows another side of the Haitian people – one of hard-working, inventive men and women whose patience with all their new, international “friends” is wearing thin. After seeing this film, the viewer become aware of how rare images of Haitians working together to repair the country are seen in the media, compared to all the pictures of forlorn Blacks sitting on piles of rubble. Peck wants us to know that just days after the earthquake hit, men and women were back on the street selling food and water (they would tie up a piece of fabric to shield their customers from the horrifying images behind them), and clearing rock and rubble with their bare hands. Many are still working at it three years later.

It’s an economic vampire story with enough examples of mismanagement to make you scream. The doc sets up Port of Prince’s Head of Sanitation as one of the local heros. Throughout the film, he recounts examples of delinquency, like of how one NGO team insisted on clearing the same creeks where his local team was already stationed, rather than give their help to poorer areas in desperate need. Why? The theory is, some work is just more glamourous, more profitable and more photogenic than others. Clearing rubble just doesn’t make for as good a story as building temporary housing, no matter how inappropriate for the climate or the families living in them they may be. One Haitian, referring to the damp, cement box he was finally given after years of living in a refugee camp, said “They wouldn’t even let their dogs live in this thing”.

The bad guy in this telling of the story is clearly Bill Clinton, co-chair of the Interim Haiti Recovery Commission (IHRC), and all he represents.  Peck’s argument is that Clinton, his staff and many of the international NGOs were first and foremost looking out for their own image, above-the-line expenses, and careers. Stereotypes that Haitians are too corrupt or too simple to help themselves kept the locals almost completely out of the reconstruction effort, a major waste of knowledge that could have saved millions of dollars and precious time.

“Build it Better” became a popular motto for the foreign aid presence in Haiti, but how can this happen if local knowledge and input are not a priority? Another of the film’s minor protagonists is Priscilla Phelps, an American senior housing advisor who believes in the IHRC, but also in the idea of channel money directly to neighborhoods to circumvent the expensive, ineffective bureaucracy. She was rarely, however, in a position to do so. At least in one scene we see her challenging a gung-ho group of young activists requesting millions of dollars for a pilot project to explain why this money would not be better spent if given directly to the Haitian people?

Peck, former Haitian Minister Of Culture, had unprecedented access to deal-makers and government officials.  He and his editor did an excellent job of sorting through the hundreds of hours of footage, shot over two years, to find the moments of incongruity that unravel the sad story. Perhaps Peck was a bit to lenient on his Haitian friends in government. The other co-chair of IHRC, then-Haiti Prime Minister Jean-Max Bellerive, gets off easy. In one clip, we see him making the excellent point that instead of shipping water, food and supplies in for other countries, they could haw been purchased from local businesses. So why didn’t it happen then? He simply states that since Haiti is poor and in need of help, his hands were tied. The only passingly critical word about local government comes from the endearing sanitation chief who, at the very end, admits that the locals and the aid organizations were equally too stubborn to admit mistakes.

The documentary does such a good job of arguing that NGOs are not doing their jobs correctly, that there is a danger the public will feel their only recourse is a boycott.  In the end, Peck’s convincing, albeit one-sided argument, could end up hurting exactly those it’s trying to help.  Peck made clear during the Q&A at the Berlinale premiere that the last thing he wants is for people to stop donating money for Haiti’s reconstruction, but this message is not in the film .

So we are left to read between the lines.  We in the West need to take responsibility for how our donations are being put to use. Instead of absent-mindedly dropping money in the United Way plastic box, we need to do some research and ask questions about how many of those dollars and cents are going to make it to the people in need. If you, like Peck, believe that local Haitians deserve a say in how their city is rebuilt, then put your money where your mouth is and donate directly to local organizations or let the big NGOs know that this needs to be a priority.  We have been too blissful in our ignorance. Sure, its tedious, but a clear conscience comes at a cost.