Call Me Kuchu is the best documentary that I have seen at the Berlinale. I knew going into the movie that it had something to do with gay rights in Uganda and I wrote that I imagined I would just sit through it shaking my head at one sob story after another. What I experienced was so different.  I love documentaries and this film uses that format so well.  It is paced like a mystery unfolding. No one comes on screen without adding something to the fullness of your understanding and nothing is redundant.

Since extensive footage was taken, there was a diversity of people that are featured is impressive. The filming took place over the course of almost 2 years so they were able witness events as well as record stories allowing the audience to see the tension building with the passage of time. Because Uganda is currently ground zero for gay rights, this movie gives witness to an issue that has fueled the sense of justice in the worldwide community.

The film opens with a subdued anniversary celebration of two gay men and sets the scene for many gatherings to come.  The people are happy but always keep a watchful eye on the high walls that surround them, enabling to be free but only while hidden.  Exposure is always a lurking threat that means losing their jobs, housing, families and sometimes their life. Outing homosexuals is big business for The Rolling Stone which is led by a bigoted man who feels he has a mandate from God to rid Uganda from homosexuals.  In a world where homosexuality is a crime and gay is taken to mean pedophile, those whose names are published in the paper are left to a dangerous fate. 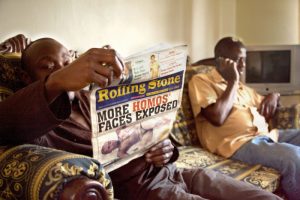 The candid statements of bias and bigotry against homesexual  make it clear that the overwhelming feeling is that homophobia is nothing to be ashamed about. Homophobia has been branded as an acceptable form expression of African and Christian identity in Uganda.  Many are willing to destroy their own countrymen in an effort to save the soul of their country.  It brings up questions about what is western and what is African.  Things that are perceived as Western are bad and things that are perceived as African are good.  The church has used this thinking to paint homosexuality as the “western corruption” and Christianity as “African goodness.”  Although this rhetoric  flies in the face of the historical record, it has mainstream acceptance.

The film-makers seemed to have gained incredible access and trust of their subjects.  The Rolling Stone’s editor talks unapolegeticly about his fight to end homosexuality in Uganda. The head of SMUG (Sexual Minorities of Uganda) David gives telling interviews that detail his history, passion and commitment to the work of helping other gays live in freedom. His death acts and the pending Death to Gays bill act as events that galvanize world support for human rights in Uganda.

The team that created Call Me Kuchu connect the dots of the issues perfectly enabling the audience to see how personal struggles and e=inextricably linked to global struggles.  The crisis of homophobia has resulted in a wave of assaults that tie Call Me Kuchu to  Man On Ground also playing in the Berlinale.  Both deal with Africans killing each other as a penalty for things they can’t  control like their heritage or their sexuality.  Call Me Kuchu carefully chronicles how people are systematically striped of their humanity by religious  fundamentalists.  You can’t argue with someone who thinks they are doing the work of God.

In spite of this, the gay Ugandans remained the sane moral center of the film.  They maintained their spirits & wit.  While many try to run back into closets, others stay and fight unflinching. Call Me Kuchu is like a 300 for gays. It is the story of the death of a martyr that serves to inspire more warriors. It had me laughing and crying in equal measure. I left uplifted and determined.