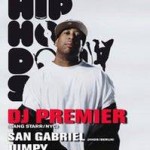 If you love hip-hop, you know DJ Premier, the most formative hip-hop producer. He has created music for everyone from Nas, Mos Def, Wu Tang Clan, KRS-One, Busta Rhymes & Gang Star to name a few.  If you are new to hip hop, he is the inspiration of your inspiration.

I stumbled upon his show at The Tube on Saturday night and ended up in the 2nd row.  The opening DJ was pure fire, amazingly good.  So when Premier started, those who were interested in him elbowed their way to the front and those who were just there to party were happy to hit the courtyard. Premier lit a cigarette, started with a rare James Brown track and went on to showcase the songs that he made throughout the years.  They are the tracks I grew up with but somehow the young boys around me where all about it.

After he worked the crowd into a frenzy (sometime around playing Mos Def’s Mathematics) I looked around and found that I was the only woman in anywhere near the front of the stage.  This might be due to Premier’s style “raw hip-hop” which is short on hooks, direct and rough. Rappers pull no punches when using a Premier track – they give it their all.

I had to give my spot up to some sweaty, young boy and hit the courtyard myself eventually.  They wanted something from Premier that I’d already had – a taste of hip-hop that has no aspirations of being pop and a view of a great DJ at work.  During the 90’s, when Premier was at the top of his game, I was in college. Hip-hop has since strayed away from his sound.

So I gave the boys my coveted spot.  I’m glad they found and appreciate Premier.  They probably won’t hear him on the radio.