Hipster has pretty much turned into a meaningless term that people use to describe cool-looking people that annoy them.  It is assumed that these people have nothing going on besides their next American Apparel order, making sure that bank transfer from mom and dad came through, partying like a non-dancing animal then blogging about every minute of it on their Ipad. But these people exist most people are very invested in not being branded a hipster so it is only natural that many people who opt out of hipster reservations and come to Berlin seem like.. well… hipsters. 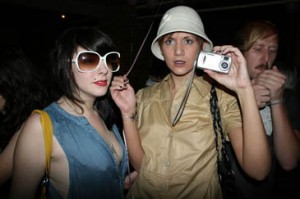 What does this means for Berlin? While there is no hard and fast rule about what a hipster his although urban dictionary has an amazing definition, all interpretations of this word have an element in common: privilege. Hipsters can afford a latte or several every day, the shiniest gadgets and the latest overpriced fashion. The distinguishing feature of a hipster is their cultural cannibalism, how they consume all things cool while adding nothing in return except a picture of them doing a cheap imitation of everything.  They can afford to sublet a place in Berlin for the summer while they check out the scene and see if this city offers enough external validation to their existence. It means some money gets pumped into the one of the poorest but coolest European capitals by uninspired outsiders who are hoping to use Berlin as a muse.

Berlin delivers. Skinny jeans do no save you from the grayness of the winters here and techno beats eventually eat away at your soul. A successful life in Berlin is one that focuses on the internal. All that cold, Russian wind blows the gel out of your hair and leaves thoughts of your own mortality. Berlin offers some realities that makes a superficial life unbearably heavy. There is no need to be annoyed by these people, they are too earnest to be threatening and too young to know any better.

I’ll admit that Berlin is full of the people known as hipsters but  hipsters rarely leave Berlin.  They either stay because if their aspiration is creative, there is little reason to leave.  Or they leave cured (or at least skeptical) of the delusion that style can be bought.