With all the social unrest going on these days, it might be good to revisit the good ol’ days of antiestablishment music.  Not the happy california flower power idealism of the 60’s hippy movement but to the mid 70’s for a look at that movement’s irate younger brother punk. Both at their heart were antiestablishment, but punk rock, besides being a reaction to the conservative takeover after the liberal 60’s, was also an answer to mainstream, commercial music that often included co-opted hippies like Simon and Garfunkel. No Elvis, BEATLES or the Rolling Stones in 1977″, declared The Clash song “1977”.  They, the Ramones and the Sex Pistols, with their loud, rebellious sound and DIY music production paved the way for the further subgenres, particularly hardcore punk.

Following punk’s success, hardcore had  two birthplaces, one in Los Angeles and the other in Washington DC. The first hardcore band to assemble in DC was the all African-American band Bad Brains. Forming in 1977 as Mind Power, a jazz fusion band, the members were introduced to punk by their then lead singer Sid McCray. Quickly becoming obsessed with this music, they changed their name to Bad Brains, after a Ramones song. This new hardcore force blew audiences away with rhythms that were faster yet more complex than any of their peers in the genre. Sid McCray left in the early stages, being replaced by their guitarist, the charismatic H.R. (Human Rights). 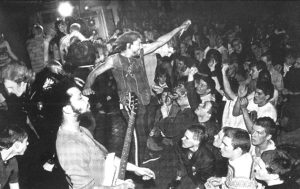 Bad Brains proved themselves to be not only a great hardcore band, but also talented musicians. Their sound would incorporate non-punk style guitar riffs and solos. With so many eclectic interests infused in their music (funk, hip-hop,etc.), Bad Brains would also play reggae, sometimes even mid-concert much to the disappointment of paying fans. Still the band has become gurus to the hardcore scene, influencing Black Flag, Living Colour, Fishbone and even the Beastie Boys. The band’s classic and current lineup is singer H.R., guitarist Dr. Know, bassist Darryl Jenifer, and drummer Earl Hudson, H.R.’s younger brother, all devout Rastafarians.