One morning when I was in the sleepy little kiez of Alt-Moabit, I decided to visit a Caribbean joint I ate at years ago. As I walked by the door, the woman coming out, just saw me and like a grandmother with a kindly Jamaican accent asked me to help her bring out some chairs and tables for the garden. The boy scout in me quickly sprang to action, and thats how I first met Barbara Saltmann, the Jamaican travel agent-turned-owner of Ya-Man Caribbean Soul Food Restaurant. Originally the place was called Soon Come, and the owner was a British Afro-Caribbean dude named Jeff who then sold the place to Barbara. She’s been dishing out fresh, home-style dishes for three years in this little place, draped in the colors of green, yellow, and black with the Jamaican flag flying out front. Barbara clearly shows her pride in her country, but told me how she, like other Jamaicans, dreamed of a better life elsewhere. Unlike others, she came to Germany instead of going to one of the popular english speaking countries. Berlin has been her home for 30 years. 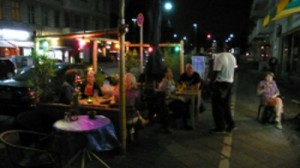 It was actually at Ya-Man’s 3rd Birthday Celebration that I would try some of her cooking. The night had an intimate family vibe, as Barbara fluttered among the guests who were a mix of regulars, some old friends that she had seen grow up, and passersby that took a seat for a cold Red Stripe or a drink from the modest list of rum-based cocktails. Her son Carl was serving and working bar. Everyone was sitting outside in the garden jamming to the acoustic sounds of Bubbha Jahme, who even drew applause from the people watching from their balconies. Basket dancing kept the evening fun for us. Here, Barbara would work in some of her wisdom: “In Jamaica, at a very young age, we all learn how to balance things on our heads: water, food, our problems, even our children. Thats why we all walk like models. Look at Naomi Campbell.” 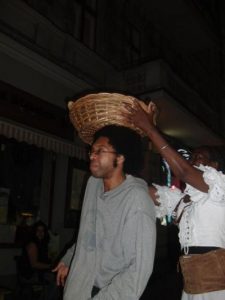 Everything was fresh and self-made, including the ginger beer and the patties, which were what I started with. I hadn’t had neither since my Brixton days and I could taste the difference. The ginger beer was smooth going down, and not as strong as the Old Jamaica brand you could get in shops. 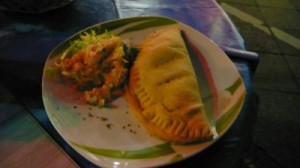 Her meat patty was probably the first homemade one I’ve ever had and it was good but could have been more spicy. Luckily, there’s the pepper sauce, which like the jerk sauce was also self-made. I was tempted to try the Jerk chicken , but thats what I usually get at these places. So I opted for the Ackee and Saltfish, which for those newbies to Jamaican cuisine, ackee is a yellow fruit thats sautéed with salted cod, tomatoes, onions and spices. 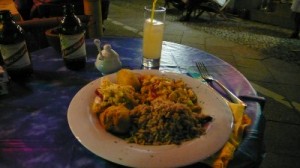 It’s Jamaica’s most cherished dish and came complete with rice and peas, dumpling, plantain, and salad. It was my first taste of this national gem and I wasn’t disappointed. The prices are reasonable as well. One could easily spend 25 bucks on 3 courses with a drink, which is better than some places in Prenzlauer Berg and Charlottenburg. There’s also a lunch menu with lower prices and daily specials.

After geburtstag kuchen, there was the limbo contest. I tried to escape, but was promptly stopped by Barbara. “You can’t leave. It’s limbo time and you have to get the guests to dance.”Someday I’m should kill that boy scout. So there I was, with some other guests trying to reach “new levels” of entertainment. For limbo, I would suggest a couple of more Red Stripes to build up your courage, that and yoga. 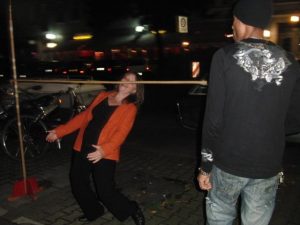 As I made my way to leave, more people attracted by the sounds and smells of Jamaica came by. At this point, Bubbha Jahme’s set turned into a jam session as one of the regulars broke out his saxophone and also sang for the crowd. Ya-Man is one of those places I don’t normally come across in Berlin, where the owner makes you FEEL at home. “Berlin is like a sticky glue” Barbara would tell me, explaining why she’s been here for so long. One could easily say that about her place. So for good food, some liveliness, and the Jamaican grandmother you’ve always wanted, come to Ya-Man.