Looking Back: The Rock Steady Crew

Remember West Side Story? You might have thought the notion of dancing street gangs in NY was pretty ridiculous, but once upon a time that was the case. Breaking, not to be confused with the media sellout term “breakdancing,” is a style of street dance among black and latino youths that arose in the 80’s as one of the bedrocks of hip hop culture. Street corner DJs would be spinning their tunes and then during the musical breaks in the songs, b-boys and b-girls would show off their moves, consisting of four main elements: toprock, downrock, power moves and freezes/suicides. You’d even get battles between two crews. Sometimes the dance was enough to end beef, but sometimes it led to more beef, and the winner chose the location of the real fight.
So in the little village of the Bronx, two b-boys, Jimmy D and JoJo formed the Rock Steady Crew, the most well-known name in breaking as well as hip hop: ROCK stood for the concrete they danced on, STEADY for the commitment they made to the dance, and CREW for the team they put together. Later the Crew would be joined by Easy Mike and P.Body 170th, but it wasn’t until Richard “Crazy Legs” Colón came on board that breaking “broke out”so to speak. By 1979, the artform was already dying down. Crazy Legs along, with Lenny Len, having moved to Manhattan and seeing the potential there, asked Jimmy Dee for permission to start his own chapter of the RSC. With Dee’s approval, Crazy Legs’ began his own RSC crew. They made just enough noise to get the attention of photographer/sculptor Henry Chalfant, who offered them the chance to perform at the Lincoln Center Outdoors Program. So their “break” came in August of 1981, when they battled the Dynamic Rockers, a rival b-boy crew, in an event that was covered by major NY newspapers, local TV stations, and even National Geographic. This gave breaking worldwide attention, and made Crazy Legs the spokeperson for the RSC and the face of the dance. 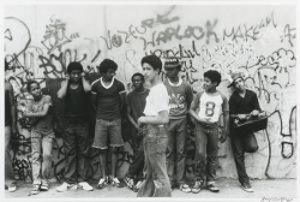 Things soon opened up for the RSC. In 1982, they would perform at the Ritz nightclub, where they met Afrika Bambaataa, the godfather of hip hop. Not missing an opportunity to join a legend, the RSC became apart of Afrika’s Zulu Nation and went on tour with him, Fab Five Freddy, various Djs and graffiti artists to London and Paris, which was the first hip hop tour of its kind. Later the RSC would appear in the iconic 80’s films Flashdance and Beat Street, and perform for the Queen of England. The RSC would then venture into the music industry which is where things took the usual sad turn. They recorded an album with Charisma Records, but of course being young and with no knowledge of the industry, they signed a contract that kept them from performing in public and in the end saw little money from their efforts. Afterwards, the Crew lost their popularity, leading them to break up. Some found other careers and others passed away.

(Rock Steady Crew in blue)
In 1991,b-boy Mr. Wiggles along with Fable of Magnificent Force approached Crazy Legs with an idea for a hip hop musical called “So What Happens Now?”. This tale about life after breaking received rave reviews and that, in addition to a performance on the Source Awards led to the return of the RSC to the spotlight. The Rock Steady Crew Anniversary is held annually and the Crew has chapters in the UK, Italy, and Japan. Crazy Legs is still the president and is joined by a new generation that not only performs around the world but remain active in their community through food drives, outreach programs, and of course dance classes to keep the youth spinning, sliding and swerving on the pavement. 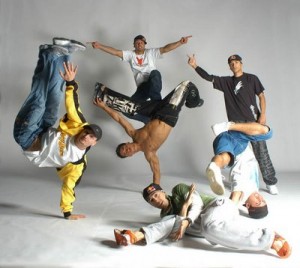