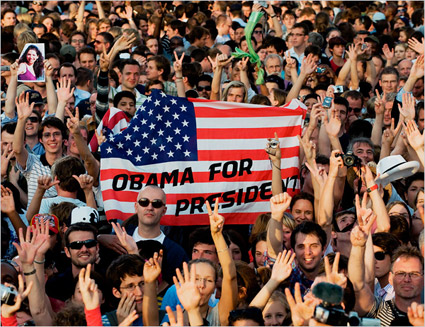 The United States of America. It is a country which exists in virtually all places, so ubiquitous, in fact, that traces of its influence can be found everywhere, from Danish television to Australian radio. The US is considered by many (depending on whom you ask) to be the world’s last remaining super power, the greatest country in the world, the richest, the fattest, the most conceited, and the stupidest. According to a 2011 poll conducted by the BBC, 31% of people, surveyed from a pool of 28,619 citizens of 16 major countries, view America as having a negative influence on the world, and 49% of people see America as having a positive influence. All remaining citizens view America as being neutral in influence. Although it is noteworthy to state that the poll’s results have shown a significant decrease in adverse opinions on United States, the fact that 31 percent of people continue to see America as being such a poor influence on the world is significant. The United States is the number one pop culture export in the world-with American television shows and movies translated, subtitled, and dubbed for citizens across the globe, and American music constantly dominating the pop charts in countries as far as Taiwan. So wouldn’t it be counterintuitive to note that a country whose culture is idolized by billions is one of those most consistently criticized?

We all remember the hilariously sad moment when South Carolina of Miss Teen USA answered the question, “why do you think that 1/5th of Americans cannot locate the United States on a map”? Her reply, a confusing mess of non-cohesive thought, was captured on national television and posted on YouTube. The video has now amassed more than 52 million views (on just one version of it). But its not just the ignorance and idiocy of Americans that really gets the international community all rowelled up. The obsession Americans have with material goods provokes citizens who live in countries where such value is not put on things to be dissatisfied with the States. Along with American consumerism comes the idea that Americans are incredibly superficial, and the patriotism of American citizens, as well as their personal relationships, are not genuine. Sentiments such as these are strengthened by media portrayals of American citizens and their lifestyles, and are cited as being one of the main reasons that America faces so much adversity, particularly on a social level.

Before America became the hub of conceptual thinking that it is today, providing the world with virtually no material goods, it was a major part of the international arms trade, helping to create America’s legacy as a violent nation full of war mongrels. Former President George W. Bush’s presidency seems to have stemmed much of the Anti- Americanism of the new millennium, with America peaking as the third most hated country in the world in 2007. The War on Terrorism, as well as countless other highly controversial decisions made under Bush’s terms, were a huge part of the reason why dissatisfaction with America rose to 53 % in 2008.

So why do people hate America? Its hard to say. Whether or not America deserves this hatred is an individual decision we all have to make. Just remember that sometimes it can be easy to put countries into groups based on stereotypes (hey, I did that with Germany). The hard part, the part that will set you apart from the others, is recognizing the complexity inherent in every country and group of people, and making decisions based on that complexity, rather than on vast generalizations.