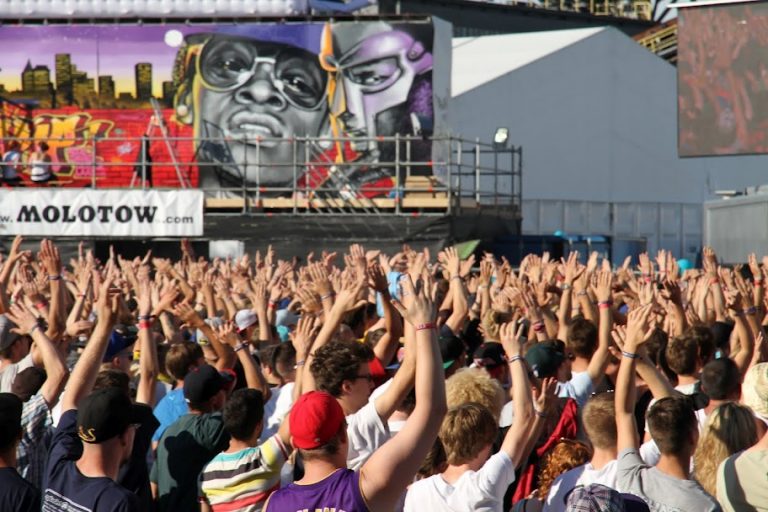 After years of living in Berlin and traveling back to the states for festivals, I finally had my first German music festival experience.  Since my opportunity to go to the Splash Festival came up spontaneously, I had to be in full adventure mode and get ready to camp in a sea of young German hip-hop enthusiasts by myself.

I got dropped off and waddled through the VIP campgrounds (fortunately, as the normal campgrounds was packed, flooded and trashed) with my oversized hiking pack that contained my tent and all my provisions for the next few days. Most people came in groups and set campsites in formation, complete with flags, wading pools, outdoor living rooms and the ever-present boom box. The vibe was relaxed and in no time, some dudes (who became my festival hanging buddies) came over to help me set up camp.

I don’t trust the weather in Germany so I expected and prepared for the worst but I was pleasantly surprised.  Except for contained thunderstorms, I was able to sleep outdoors and enjoy the festival without drowning or freezing to death.  I was educated on German hip-hop, something I’d love to become more knowledgeable about.  I was challenged on my possessiveness of hip-hop culture as Germans matched me almost lock-step in the hip-hop songs they grew up with.  Although these songs have a different relevance for me, a native English speaking New Yorker, they are no less meaningful for the Germans that embraced them.  Moreover, Germans have a fierce loyalty to the classic hip-hop acts that Americans dismiss as old-school.

The festival featured de la sol, Dilated Peoples, Lords of the Underground, and Nas among others.  The acts were pretty evenly split between German and English acts.  A festival goer that had been to Splash before said she felt that the organizers included more German acts this year and gave them more prominence and she felt that this shift was successful.  The mostly German crowd remained engaged throughout the festival.  Although they may give mad respect and have a history of listening to English acts, hip-hop resonates powerfully when its audience can understand every part of the message – not only what is said, but what is implied and alluded to.  The references that MC’s make serve to complete the story they tell.

I will be writing in more detail about Splash because there is a lot to tell. This festival packs a lot into 3 days.