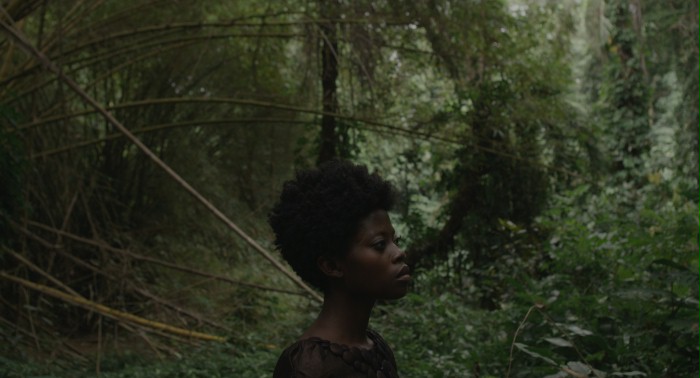 I started this guide last year as an attempt to highlight cinematic representations of black people at the Berlinale. This year I found 22 movies that offer a variety of stories from around the world.

The advances in digital technology has helped to increase the quality and quantity of films about people from the African diaspora. I am looking forward to Kwaku Ananse for its lush cinematography. The Chair has me curious to see what story unfolds when the American South is left to children, survivors of an epidemic in a science fiction tale. Fatal Assistance will be hard to watch as post-colonial charities misuse the global generosity that was meant to rebuild Haiti after the earthquake. The series called ”NATIVe – A Journey into Indigenous Cinema” is full of a wealth of talent.

Every film is either in English or has English sub-titles and you can get tickets today. The festival is February 7 – 17, 2013.

Film descriptions are after the photo gallery. Enjoy!

Berlinale Shorts 2013
GHA/MEX/USA 2013
REGIE: Akosua Adoma Owusu
Jojo Abot
Kwaku Ananse by Akosua Adoma Owusu recounts a tale from Ghana: The spider wants and collects all bits of wisdom but ultimately the vessel breaks – the young woman has to face up to her father’s polygamous life but in the end encounters herself. Read More

Berlinale Shorts 2013
PRT 2013
REGIE: João Viana
Mutar Djebaté, Fatu Djebaté
Fatu’s father has returned home to Guinea-Bissau from Portugal to attend her wedding. The young woman teaches at the university and her future husband is a well-known musician. Their wedding is supposed to take place in Tabatô, a village where everyone makes music. On the way there, it becomes apparent that the father is seriously traumatised by his experiences as a soldier in the colonial war decades earlier.Read More

David Muñoz
Spain, 15’ (WP)
In About Ndugu by David Muñoz, a black boy is looking for a new wife for his American foster father and hopes his grandmother might be the right one. Read More

Wettbewerb 2013
DEU/ZAF/FRA/NLD 2013
REGIE: Pia Marais
Rayna Campbell, Rapule Hendricks
Layla Fourie, a single mother in South Africa, is given the opportunity to get proper employment as a polygraphist for pre-employment tests at a casino complex. In the constantly present atmosphere of mistrust, lies and fear, Layla herself becomes a suspect of a murder happening on her first day at work. Read More

Generation 2013
USA 2012
REGIE: Austin Peck, Anneliese Vandenberg
Sinbad Eyani
For me when I huﬀ glue, no stress for food. I don‘t feel Seye Adelekan, Esau Mwamwaya hungry, no stress. When it‘s cold and you sniﬀ , you don‘t feel cold.
As long as you‘re high, everything‘s ﬁne. But as soon as the eﬀect wears oﬀ , you feel terrible and you haven‘t a cent in your pocket. This is everyday life for homeless street children in Kenya. Having ﬂed from their villages where the animals died due to drought, abandoned by parents who no longer care for them, they hang around in the towns, trying to make it through each day. In the past, neighbours or villagers would take care of them – but now they have to look after themselves. Read More
Twa Timoun | Three Kids | Drei Kinder

Generation 2013
BEL 2012
REGIE: Jonas D’Adesky
Jules Vitaleme, Sima Mickenson, Pierre Jean Mary
Pierre, when the earthquake happened, where were you? – I was very scared. It lasted 35 seconds, that‘s what everyone said. 35 seconds is a really long time.
After the massive 2010 earthquake in Haiti, three friends, Mickenson, Pierre and Vitaleme, leave an overcrowded children‘s home and try to survive on the street. In the ruins of their devastated hometown, Port-au-Prince, they reorganize their daily life. They sleep in abandoned houses, play football with the other boys on the street and with a couple of tricks they even manage to get a warm meal. As long as they stick together, painful memories can‘t bring them down. Read More
Satellite Boy

Generation 2013
AUS 2012
REGIE: Catriona McKenzie
David Gulpilil, Cameron Wallaby
This is our land. It is alive. It feels you. It knows you. Your mother is not coming back, his grandfather says. But Pete, the Aboriginal boy, can‘t believe it. Since his mother moved to the city, he has to live with his granddad out in the country. He‘s nice, but sometimes he really gets on Pete‘s nerves with his old stories. As their home, a run-down movie theater, becomes slated for demolition, Pete embarks on a daring mission to save it. On his journey, he gets lost in the bush and experiences the power of nature and the mysterious magic of his ancestors. Read More
The Chair

Generation 2013
USA 2012
REGIE: Grainger David
Khari Lucas
A deadly epidemic spreads across a rural area in the south of the USA. The ﬁ rst to die is the mother of the boy who narrates the story, and many others follow. Nobody can help: neither the doctors, nor the prayers of the faithful. Read More
Assistance Mortelle | Fatal Assistance

Berlinale Special 2013
FRA/HTI/USA/BEL 2012
REGIE: Raoul Peck
Filmed over two years, Haitian born filmmaker Raoul Peck’s documentary tries to find out how, in spite the international community’s promises, the needs of ten million people in the Caribbean came to be met in such a paltry fashion. He questions political decision-makers, private contractors and engineers – and of course ordinary Haitian people, who have begun a painstaking reconstruction of their own.Read More

Forum
ZAF 2012
DIRECTOR: Ntshavheni Wa Luruli
Florence Masebe
Elelwani is a young university-educated woman who has been brought up in an environment steeped in tradition. Her parents have promised her hand in marriage to the Vendaking and, as a dutiful daughter, she wants to obey their wishes. But in order to fulfil her promise, Elelwani must abandon her dreams of travel, further education and — most importantly — her commitment to her one true love. Read More

Forum
IND 2013
DIRECTOR: Fahad Mustafa, Deepti Kakkar
A 28-year-old electrician living in Kanpur is renowned for his prowess in stealing electricity. He is a robin-hood figure, stealing electricity and charging the rich to provide free connections in impoverished neighborhoods. In the face of day-long power-cuts, he runs illegal connections from one neighborhood to another so that homes, factories and businesses could function normally. On the other hand, the city administration is renewing efforts to clamp down on power-theft, which costs them millions of rupees in losses each year. Yearly drives to remove illegal connections are met with street protests and anger. In the meantime, lack of electricity drives people to use generators run on fossil fuels. This is choking the town, making Kanpur one of the most polluted cities in India. A picture emerges of a modern dystopia encompassing urban decay and desperation in the lack of electricity. Underlying the localized crisis in Kanpur, India’s leather capital, which provides raw material to major western brands, is the glaring energy poverty in the country, where a third of the population is bereft of this basic need, and the rest grapple with power-cuts that dictate their own terms. Powerless puts a lens to an unexplored narrative of one of the world’s fastest developing economies. Read More

Forum
USA 1967
DIRECTOR: Shirley Clarke
Jason Holiday
“What I really want to do is what I am doing now: perform,” says Jason Holliday in “his” portrait. Jason – black, gay and a self-declared hustler – directs himself, follows directions, narrates, invents, confesses, makes claims and ultimately challenges the camera, the film team composed of Shirley Clarke and Carl Lee (with whom she also collaborated on The Connection and The Cool World) and us, the viewers, as far as our notions of identity and truth are concerned. Reviews of the film continually point out that it cannot be categorised, not as documentary or phantasmagory, as audition reel or feature length interview. Portrait of Jason is all of those things at once and yet something else too: an extravagant dialogue with a camera and an audience. Since its initial success and distribution through the Filmmakers Coop, it has only been available on VHS and, since 2006, on DVD too; in the latter case, with the added speculation that the film’s persistent unavailability through the years can only be understood as a material expression of its categorical ambiguity. Now Portrait of Jason has finally been restored: “This is a picture I can save forever” (Jason Holliday). Read More

Culinary Cinema
ITA 2012
DIRECTOR: Francesco Amato, Stefano Scarafia
Louise lives with Rick and Joe, her grandchildren aged 3 and 4 years. Louise, Ana, Elisabeth, Jeneba are the women of the Fadiouth island millet couscous Presidium. The community is Catholic and Muslim, but women share the meeting places, religious celebrations and live in mutual respect. They work together in a traditional way from seeding the millet in the land of baobabs to washing it in the sea water. The meeting between sea and land characterizes the traditional food of this small island in the south of Dakar, in the middle of a lagoon filled with the waters of the Atlantic Ocean and populated by mangroves. Read More

Culinary Cinema
DEU 2012
DIRECTOR: Boris Schaarschmidt
Dara Iruka
Haleema is the parable of a young Darfurian girl who must fight for the survival of her family. In the blistering heat of the Sudanese desert, a pregnant mother and her two young children are on the search for water and safety from the dangerous Janjaweed, a merciless militia who terrorizes and kills the people in the region. Read More

German Cinema – LOLA@Berlinale
DEU 2011
Kübra is an infestation. As the only female intensive delinquent in Berlin, the most serious category of juvenile offenders within the local youth prison regime, she has been plagued and hated since the age of 14. But in reality she just longs to be an ordinary girl, a girl that someone will care of, and hold
her in their arms. She will take us on a journey into her past, to a place where she has grown up and knows like no other: the woman’s prison in Berlin where she served for almost four and a half years.Read More

NATIVe
AUS 2007
DIRECTOR: Warwick Thornton
Kiara Gibson, Mitjili Gibson
Nana cooks, dances and paints under the adoring gaze of her small granddaughter. Someone has to put food on the table and the much-loved grandmother is also a fearsome hunter who carries out her own special code of justice.Read More

NATIVe
AUS 2006
DIRECTOR: Warwick Thornton
Rowan McNamara
When living conditions in their remote community become unbearable, two teenagers leave their home and head for the city. Their bid for freedom soon turns into a nightmarish struggle for survival – a battle which almost costs them their lives. On returning to the outback, the pair must reforge their place in the world. Read More

Forum
PRT 2012
DIRECTOR: Salomé Lamas
A neutral setting. No-man’s land. A man sitting on a chair, talking about his life. In his younger years, he was a soldier in an elite Portuguese commando during the colonial wars in Mozambique and Angola. After the Carnation Revolution, he worked first as a bodyguard in Portugal and then as a CIA-hired mercenary in El Salvador, before finally carrying out contract killings as a member of GAL, the anti-Basque underground organisation. The monstrosity of the atrocities he describes is at odds with the film’s formal minimalism and the protagonist’s way of presenting himself. Read More

Forum Expanded 2013
FRA 2012
DIRECTOR: Filipa César
Departing from the Guinea-Bissau film archive, the cinematic essay Cuba proposes a path from Amílcar Cabral’s life as an agronomist through his role as the leader of the Guinean liberation movement and encourager of the birth of Guinean militant filmmaking supported by Cuba.Read More